covering the WCI, or Why Contests Irritate (Me) 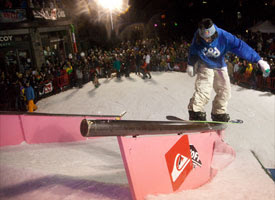 Last week I got roped into doing a contest wrap-up for ESPN Snowboarding. Since this was more a favor for an old friend than a dream assignment, I carefully laid out my stipulations in advance: I would do this only if I didn't have to produce any "real" contest coverage (i.e., lame-ass Maddenesque play-by-plays), that what I did turn in could be heavy on the bitter, that the $10 cover for the after-party shenanigans be reimbursable, and that said friend/editor not forget this agreement come Monday morning.

We shook virtual hands. Thirty-six hours later, I awoke to a crippling hangover and hobbling party-shoes blisters; the following morning, I submitted an article that made no attempts to disguise my disgust. Kindly, most of my words were left intact; predictably, Tedo had to "mellow out" the rest of the copy to make it more palatable to his less-jaded audience. You can read it here. But since I have illogical attachments to first drafts, here's the original, in all its pissy glory:

There are many things I love about snowboarding in Mammoth: avy bomb alarm clocks; slashing corn through June; a refreshing lack of hippies. Contests, however (save for springtime ski racing, which is both nuts and horrifyingly skintight), just don’t make the list. If I’ve endured a bus ride reeking of tourists’ early morning beer farts to get to the mountain, then I’d damn well better be riding when I get there. Competitive snowboarding means numbing your ass at the bottom of the pipe while you watch scores of 16-year-olds do things of which you’re physically incapable. I hardly find that inspiring.

Trading my Saturday for the West Coast Invitational last weekend was a decision I regretted as soon as I dropped my board into the three inches of rainwater that had accumulated in the bed of my truck overnight.

A thousand feet up, conditions hadn’t exactly improved. Due to continued drizzle and friendly 60 mph gusts, there was but one lone sponsor parked (literally, in his van) in front of Main Lodge, attempting to pawn off samples of beef jerky. A suss-it-out ride up Chair 1 rewarded me with stinging ice pellets to the face and what appeared to be a decorated, yet deserted, halfpipe. As I slogged through the worst, wettest snow of the winter, it occurred me to that perhaps my prayers had been answered -- that they’d postponed the contest for another day. I was unkindly contradicted upon running into my neighbor outside the Tusks bar, where hordes of folks were trying hard to drink it blue. Wearing his best liftie garb, despite actually working in the marketing department, he cheerfully announced that things would get started in half an hour. This meant two things: one, that he was “shadowing,” which is what the ski area likes to call “laying off almost all your staff and then making the remaining employees fill in the gaps,” and two, I was 30 minutes away from a thorough soaking and endless reggae.

I was wholly unprepared for what happened next. See, instead of the usual scene -- “color commentary,” eager young fans, scoring -- the WCI is a jam-format, rider-judged event that resembles a contest only in its prize purse. And by “rider-judged,” I mean the actual competitors, not a panel of guest pros. In fact, if I hadn’t heard Oren Tanzer, Mammoth’s (ahem) Youth Action Sports Marketing Director, give the following instructions, I would’ve thought I was watching two hours of practice runs: “Okay, so, all you have to do is ride and have fun…in the wind and rain. For $10,000.”

Not another word was uttered for the remainder of the event, and the boys (plus Elena Hight and Mercedes Nicoll) got to work. Within 10 minutes a fine herringbone pattern had been etched into the crumbly, feta-like pipe walls, eliciting many a pirate cry from unsuspecting riders. And yet they soldiered on, smacking strategically placed jibs and defying the gray weather with patterned neon. Whirligig Luke Mitrani dazzled his bros with sick cutbacks and double daffys, clinching his win and $6,000 with an artful hole-in-one. Local boy Greg Bretz claimed a distant second place and $3,000, slam-dunks and double pikes in his wake. The ladies split the remaining $1,000 just for showing up.

At 8 p.m., snow trucked down from the ski area covered monstrous scaffolding supporting the three-rail contraption set up in the ghost town that is The Village. Inclement weather could not deter Mammoth’s hardy tourists from a solid hour of jibtacular spectacle, charmed as they were by Snowboarder magazine editor Pat Bridges’ dulcet voice announcing all manner of sliding. With the hood of my puffy up over my ears and the wind carrying sounds in odd directions, it began to sound as though Jello Biafra himself was sassing the riders, particularly Lucas Magoon, whose name simply begs for repetition. Hip-hop blared, people sipped illicit cocktails via well-hidden CamelBaks, and one proud idiot hoisted a green sign declaring “Free swine flu!” for all to enjoy. By the time my neighbor on the catwalk had slurred “Do a backflip! C’mon, man!” and torn an enormous Vans banner from the railing, there were but three minutes to go. Dylan Alito marked the occasion by marrying his teeth to the bottom half of the down box, baring his bloody mouth for the camera as ski patrol escorted him from the arena. At least four of the next seven riders ate shit in tribute, yet lived to hoof the scaffolding stairs another day. Stirred, but not shaken, the remaining 19 dudes lined up for last runs and cast their ballots in the corral. In an unprecedented move, there stood but one vote between the Winner Who Would Take All and his runner-up, who normally would take nothing. Sir Tanzer handed a crisp stack of bills totaling $2,500 to shocked bridesmaid Mike Casanova, whom the others would no doubt pester for drinks at the after-party later that night.

Top honors and a sweet handmade box containing $10,000 in cash were bestowed upon Dan Brisse. He mounted the single Red Bull podium, held aloft the magnificent gold cobra, its jewels sparkling in the gleam of a thousand flashbulbs, and watched a couple bucks flutter away in the breeze. The gondola lurched forward; up and away we were carried to Canyon Lodge for Dilated Peoples, MFM, and plastic cupfuls of Jameson as reward for surviving the squall.

Labels: bitter beer face, calling it in, contest schmontest, espn, reasons why i don't go out anymore, so much for those spendy shoes