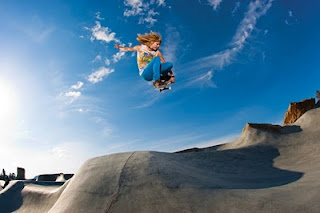 As published in Eastside magazine, winter 2009. Thanks to Peter Morning for the gorgeous photo.

Living spitting distance from a range as grand as the Sierra, we’re a bit spoiled when it comes to athletic celebrity. In fact, with so much talent packed into our modest eastern nook, there’s a good chance that one of the folks in line behind you at the post office last Tuesday has a medal or two hanging over the fireplace.

This seems natural, of course, what with our alpine surroundings. Bet you’d never guess, though, that among our mountain royalty lives a shredder of the four-wheeled persuasion: pro skateboarder Lyn-z Adams Hawkins.

As classic California girl as you can get, Lyn-z’s spent much of her 20 blonde, blue-eyed years in her hometown of Cardiff-by-the-Sea. Her mom, Lynn, presented her with a skateboard at age two, a gift complemented by the Encinitas YMCA skatepark membership her older brother, Tyler, gave her four years later. Before she was out of elementary school Lyn-z was competing, mostly in vert (skateboard halfpipe) contests; it became quickly apparent that the little string bean encased in oversized protective gear was about to start threatening the scene.

It’s been close to a decade now since Lyn-z took her first run for the judges, and she’s more than made good on the promise of her childhood. Beyond her renown on the small, yet vital, women’s circuit, she’s become one of the more recognizable faces in pro skateboarding, period, earning the respect of icons such as Tony Hawk, who featured her as the only girl in his Tony Hawk’s Project 8 video game and as one of only two ladies in the upcoming 2009 edition, Tony Hawk Ride. (She’ll share the honor with Cara Beth Burnside, the veritable godmother of women’s skateboarding.)

Lyn-z’s the youngest girl ever to win a gold medal in skateboarding at the X Games (one of three golds, three silvers, and one bronze in her collection); she earned her most recent one in July 2009 when she took first place in women’s vert at X Games 15. She was the first girl ever to do a kickflip Indy (in which the rider flips the board 360 degrees with her feet and catches it with her hand) on a vert ramp and intends to be the first to land a McTwist 540 (a one and a half times aerial spin with extra flourish).

Oh, and then there’s this one minor detail: the Mega Ramp. Designed and made famous by legendary vert skater Danny Way, this monstrosity offers a 48-foot-tall roll-in that catapults whichever crazy person’s on it over a 55-foot gap to the 28-foot quarterpipe greeting him on the other side. (This from a man who aired the Great Wall of China, dropped into a vert ramp from a heli, and skated off the giant guitar on top of the Hard Rock Café in Las Vegas.)

In 2005, Lyn-z didn’t just join the sparse ranks of the insane; she became the Mega Ramp’s first female challenger. She remains the only woman ever to step to the beast — an impressive feat made more so by the fact that she was just 15 at the time. Far from satisfied, she landed the 60-foot-gap version in fellow pro Bob Burnquist’s backyard last August.

During her more human moments Lyn-z’s either “computer-nerding out,” shooting photos, or, in the winter months, slashing snowflakes. She spent her first full season here in 2006/2007, trading Southern California sand for powder days and cold podiums. A spontaneous trip in 2005 with former sponsor DC had introduced her to Mammoth’s abundant acreage and competitive snowboarding.

“I jumped in the RV and went along for the ride,” she remembers. “I ended up doing a USASA [United States of America Snowboard Association contest] at June Mountain and got second. I was stoked!” Not bad for someone who’d ridden maybe two weeks total since getting on her first lift at age 11.

Like so many Sierra transplants, Lyn-z’s made the high-altitude pilgrimage here every winter since. “I love how beautiful it is!” she gushes. “My friends, the mountain, the [Volcom Brothers] skatepark…I get really excited when I get to go back [to Mammoth] because it feels like my second home—which it is.”

So when you find yourself inevitably bumping grocery carts with her next January, make sure you introduce yourself to the newest member of the Eastside extended family.