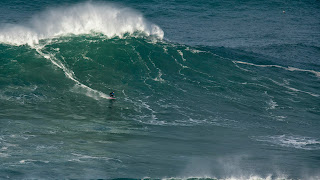 Last week, in a rare moment, big-wave surfing made mainstream headlines. Brazilian surfer Carlos Burle's ride on what's being debated as a 100-foot wave grabbed the world's attention first, but the horrifying wipeout of his tow partner, Maya Gabeira, ignited equal amounts of discussion from all corners of the surfing world. Even famed big-wave pro Laird Hamilton jumped into the fray, talking to CNN on Oct. 28 to voice his opinions on the subject.

The most interesting part of Hamilton's four-minute interview was not his clear discount of Burle's achievement, but his heavy indictment of Gabeira. During the same Navaré session, the 26-year-old Brazilian pro bailed on a heavy wave of her own, was knocked unconscious, broke her right ankle and was rescued by Burle. When asked by the CNN reporter to comment on the incident, Hamilton didn't hesitate."She doesn't have the skill to be in these conditions. She should not be in this kind of surf," he said. "I feel like it's Carlos' responsibility to take care of her and he's just lucky that she didn't drown."
In less than 30 seconds, and in front of an audience for whom the very idea of a woman paddling into skyscraper-size surf is surprising at best, Hamilton -- one of the most identifiable and outspoken men in the sport -- managed not only to discredit one of surfing's precious few female big-wave surfers, but to dismiss her without bothering to mention that this wasn't her first rodeo.
He had an opportunity to surround his comments with encouragement, or at least an acknowledgement that Gabeira was not the first or last woman to enter this microcosmic sliver of surf culture.
But he didn't. And by failing to place Gabeira in her hard-won spot near the top of women's big-wave surfing, he in turn deleted women as a whole from the larger discussion.
"I have suffered a lot of prejudice in my sport. I still face it," Gabeira said on "X Center," an ESPN Brazil show that aired Wednesday. "I think Laird's words have an air of prejudice, of machismo. He doesn't want to believe; he doesn't want to see a young girl in this position, having this kind of exposure surfing huge waves."
With five Girls Performance trophies -- four of them consecutive -- from the Billabong XXL Global Big Wave Awards to her credit, and experience conquering waves topping out at 45 feet, it should be clear that Gabeira is not new to this game. (It's worth noting that she successfully pointed it down a different Nazaré wave just a few days before the accident. It's now her submittal for XXL 2014.) And she hasn't just been practicing in monster surf since her teenage years. Gabeira also commits to regular cross-training, coaching and conditioning under the direction of Andy Walshe, director of high performance for Red Bull -- including participating in their surf-survival curriculum, which is based on big-wave breath-holding.
You might agree with Hamilton's characterization of Gabeira. Or you might, like some Internet commenters, hurl colorful invective and question whether he has a right to an opinion at all.
But this isn't about whether Hamilton is right or wrong about Gabeira's skill level. It's about the fact that he had a unique opportunity to enlighten the CNN set about women in big water; that he instead, by omission, framed Gabeira as a loose cannon who has never been past the breakers before.
By no means does Gabeira discount the consequences of her calling. And she's obviously selective about with whom she'll trust her life once she leaves the beach. She and Burle have developed a teacher-student synergy in seven years of surfing together; it works because Burle, 46, helps supply the tools and wisdom she needs to improve while still allowing her to make her own decisions about which waves she'll chase.
Burle also provides encouragement -- no small gift in a community that, by virtue of its tiny size, depends on itself for the kind of understanding no one else can offer. And while Burle is grateful for Hamilton's attention to their session, and respects that he might have a different point of view, he notes that his on-camera critique lacked that very basic, and human, element.
"[Laird Hamilton] is a waterman; I really admire him. I grew up watching him surf, and what he has done for the sport in terms of equipment and practicing, training, it has been great," Burle shared via phone Tuesday. "On the other hand, it's very easy for you to say that someone doesn't have knowledge [and] is not ready to be there. But I would expect him to come with another comment, like, 'I'm here to help you, Maya. You want to train with me?' That would be much better to hear from him.
"She wants to do it, you know? You cannot go and say you cannot do it; she's not crazy. She's good for the sport. And she loves to surf big waves. And as an ambassador of big-wave surfing, I would appreciate if he [reached out to] her. I'm not expecting anything from him -- just, 'Maya, what happened to you? I think you need to get better; let's train together. I want to give you a hand.'"
The small, elite cadre of female big-wave surfers whose feats barely register on the wider world's surfing radar deserved more than a glancing, negatively spun aside. Hamilton's public assessment lacked context, not to mention tact. He did not qualify Gabeira's attempt with a quick sum-up of her previous "makes," and he didn't preface his statement with a few words of respect, as he did for Burle (however backhandedly). In the end, as fellow big-wave rider Ken "Skindog" Collins bluntly pointed out in his MaverickMoments.tv edit last week, Hamilton failed to provide the one thing all surfers, no matter the shape of their bits or where they are in the pecking order, can offer on a stage public or private: support.
Outside of a few glossy Hollywood clichés and the occasional pro surfer/celebrity dalliance, most of America doesn't pay a lot of attention to surfing. These brief moments on camera like Hamilton's, when high-profile surfers are called on as experts to speak for their people, are all they have to accurately represent themselves on a national, even global, stage. They have a responsibility to seize opportunities to educate, rather than just pontificate, when they're handed the mic.