how to fall in love with los angeles 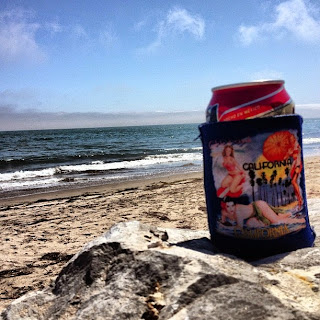 1. In the morning, early into summer, jog lightly down to Culver City Park. As you wait for the light to change, smile at the magician having promotional photos taken behind the bushes framing the entrance sign, proudly defying honking commuters and rubbernecking dog-walkers as he furls the red polyester lining of his cape dramatically around his face. Note his air of mystery before breakfast, and his impressive top hat.

2. Roll illegally down Westside sidewalks on your too-heavy beach cruiser to the farmers’ market some weeknight. Carefully deliver your kitchen knives to Gary, the gregarious one-man sharpening service, then browse artisan kimchee while you wait. Regret not arriving in time to snap up jamon ibérico from the French cheese vendor. Slurp a shot of pure sugarcane juice and listen to a man cover “Mrs. Robinson” on acoustic guitar in the middle of the aisle. Free-sample dinner.3. Meet a writer friend for lunch Saturday in Little Ethiopia. Swing open the door to Merkato and find yourself shrouded in a haze of pungent, choking incense that appears somehow to originate from the kitchen. Rip small bits of injera from the common plate to soak up gingery lamb wat while you discuss a story he’s pitched to The New York Times about free ashtanga yoga at a craft brewery east of the 5.
4. Spend the weekend shivering in a cheap tent atop Mt. Baldy for the sake of a small yet hearty music festival. Go not straight home Sunday afternoon, but instead to the Korean spa on Norton and Olympic. Move nakedly from scalding tub to cold pool, salt sauna to jade floor, in the company of strange women. Have some downright respectable pork-belly soup and discover that the girl who’s seated herself next to you and your friend somehow knows people you’ve been friends with for fifteen years in mountain towns hundreds of miles away.
5. Give in to the 1 a.m. siren call of Roscoe’s House of Chicken and Waffles on Pico after witnessing Ms. Lauryn Hill totally pull off what looked like checkered chef’s pants at her show at The Wiltern. Observe a young woman and a young man flirt by singing a cappella to one another from across the tables, then slide in together to improvise a duet while you don’t care at all if the world’s greatest cornbread is crumbling out of your open mouth.
6. Attend a public potluck in Griffith Park via Facebook invitation and unquestioningly accept home-cooked food from utter strangers. Appreciate the separate grill for the vegans. Give real consideration to joining the next adults-only jam session in the inflatable bouncy house, held on the hour, every hour, for fifteen stupendous minutes. Opt out.
7. Affix your portable speaker system to the handlebars of your bicycle and wend your way along the Venice Beach boardwalk. Pull over to enjoy a phalanx of men and women well past middle age energetically boogieing on roller skates to an oversize boombox. Silently applaud the boy who periodically sweeps their concrete dance floor of sand.
8. Shun the peristaltic freeways and instead map travel on surface streets. Try vigorously to remember which roads morph into others and where: Washington and Culver at Irving, Rossmore and Vine at Melrose. Discover the architectural effects of cultural ebb and flow in the city’s quilt of neighborhoods and decide it’s a decent trade-off for not really getting across town any faster.
9. Experience a brief moment of disorientation upon noticing that your Santa Monica gynecologist’s office is more stylishly situated than your own apartment. Employ expensively learned ujjayi breathing to calm down, then ask her earnestly where she got those fabulous throw pillows.
10. On Westwood approaching Wilshire, slow your truck to a pace that barely registers on the speedometer to allow a pair of cyclists a little room along parked cars in your lane. Cringe when an impatient motorist some lengths behind you leans on the horn about it. When you reach the stoplight and the helmeted couple blocks you in with their bikes, then demands you roll down your window to explain why you honked at them a ways back, patiently argue your innocence while internally acknowledging they simply won’t believe you. Because, you know, you’re in a pickup, for chrissakes. Beam pride their way nonetheless at the light change, because man, that was ballsy.
11. Accidentally discover Persian ice cream in Westwood thanks to craving and proximity. Lose it over the sensation that is half the namesake flavor of Saffron & Rose. Briefly recall your Cuisinart, pushed into the back of a kitchen cabinet, and vow to make ice cream from scratch this summer. Check yourself and take home a couple pints instead.
12. Creep through lunchtime traffic into the exquisitely perfumed bosom of Beverly Hills, where you have an appointment to keep. Remember where the precious free parking is, then roll down the windows and listen proudly to the incessant whine of your faulty water pump as it echoes off the walls of the garage and the gleaming bodies of cars that cost more than you make in a good year. Love-tap the bird shit and sap that cling faithfully to the hood before you head off to be microdermabrasioned back into your twenties.

Labels: $4.73 per gallon, didn't see this coming, getting quite weird, movin' on up, should really take more photos